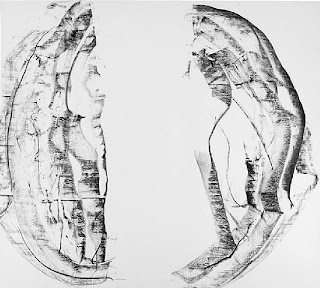 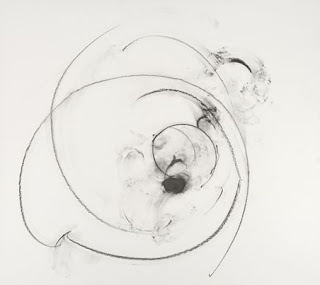 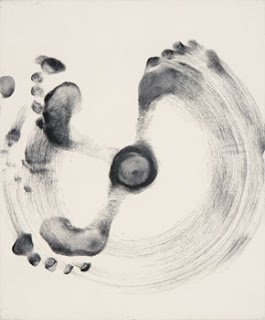 Revolution (2006) Charcoal on paper﻿
American choreographer Trisha Brown is featured in  Move: Choreographing You at the Hayward Gallery. Her company are also performing at Tate Modern as part of Dance Umbrella in London.
Last year, her drawings were featured in a solo show at Sikkema Jenkins in New York. Her drawing practice informs and dictates her choreographic work with diagrams produced for works such as Locus (1975) and Glacial Decoy (1979). In conversation at the Hayward on October 16th, Brown stated that her major new piece would be based on sketches of small boxes containing marks, which move across the paper. Keeping to her choreographic approach Brown declined to be pinned down on what this new choreography might be. Known for choreographic works which pioneered everday movement and the transient nature of dance, it is curious that her piece It's a Draw (2003) aims to record bodily gesture. The untitled drawings above have been made during this perfomance.
Postioned above a sheet of white paper, with charcoal in hands and feet, Brown falls towards the paper, dragging dusty black marks along with her. It's a Draw  records her movements but also, engages the audience in a historical debate about how dance is archived. From the Greeks to the present, different methods of dance preservation have been explored, with drawing being one of the most useful tools. The most famous dance notation systems are Laban and Benesh, all of which Brown appears to be referencing in a more personal and archaic way in It's a Draw. Her position within this debate between dance and art was commended by her inclusion in Documenta 12 and also in the Hayward exhibition, which aims to fully mark out this discussion.
More information:
Trisha Brown Company
Posted by TBC Artists' Collective at 06:06