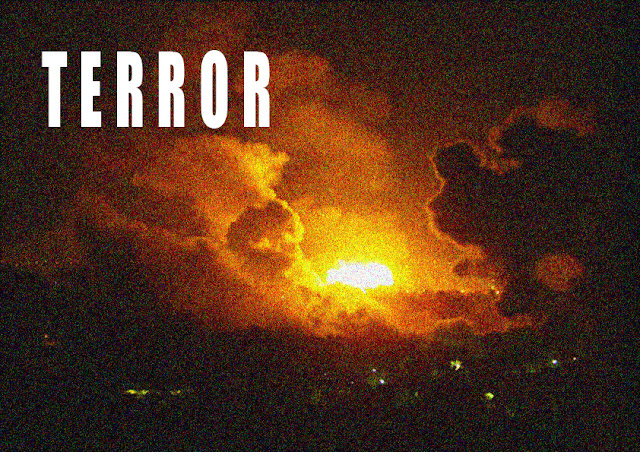 “For reasons that should by now be self-evident, bearing witness does not imply special access to the essential meaning of critical events. Nor does being in a position to see those events with one’s own eyes privilege the testimony of any individual, no matter where they stand in relation to the presumed center of the drama, since so many other eyes are trained on it from so many uniquely revelatory positions. Logically, this observation is elementary, but as soon as discussion moves from the abstract to the concrete, agreement vanishes in the so-called “fog of war”, that atmosphere of crisis and ambiguity in which opposites confront each other only to lose their bearings, that moment of truth in which sharply defined antagonists begin to resemble each other in their confusion and desperation and truth vaporizes and indiscriminate death has the final word.”

On September 11th 2001, Gerhard Richter was en route from Cologne to his opening at Maria Goodman Gallery in Manhattan. He was due to arrive at 12.30pm, almost 4 hours after the first plane hit the World Trade Centre. Richter and his wife were diverted to Halifax, Nova Scotia and like the rest of the world, became restricted to watching the unedited narrative stream continuously from TV screens. For those who count themselves amongst the most cynical disbelievers in fate, it must be hard not to concede it was Richter’s destiny to be thrust somehow into the sublime horror of one of the defining moments of the early 21st Century.

The events of that September day are accompanied by a very specific and saturated imagery. It was a horror of an intensity not witnessed on the American homeland since colonial times. Ironically in the latter half of the 20th Century, it was America that had been responsible for creating the subject of such sublime imagery. The H-bombs over Hiroshima and Nagasaki during World War 2 are a subject matter not unfamiliar to Richter. Unlike the atrocities committed in Japan in 1945, images of what happened in Lower Manhattan were unveiled in real time and then replayed continuously to a worldwide audience.

The string of words “nine eleven” has a meaning so intense in Western nations that it obliterates all that defined it before. Primarily it marked an increased aggression in US and European foreign policy. Retrospectively it is coming to represent a turning point in how media captures our memory of an event. What occurred in New York, Washington and Pennsylvania on the 11th of September 2001 is etched into the collective memory of North American and Western European culture. When discussing the event, the attempt at grasping a meaning behind it often begins with a personal account, as if ‘we’ were all there. As if we all saw it played out in reality. The relentless media coverage for almost two weeks after the event placed us in a 360-viewing platform. We were fed images that gave us the impression of being in Manhattan above all, when everything unfolded across the ubiquitous clear blue skyline.

Over a decade later, we have become more accustomed to taking part in collective events that we are not physically a part of. Nine eleven was a trigger of this phenomenon. The removal of physical self in the Web 2.0 era has somehow come with a natural ease. It seems logical to concede that there has always been a concealed science fiction desire to be in two places at once. A strong trend has emerged in which major news stories are broken on Twitter by amateurs, often more rapidly than the conventional broadcasters. Major news events are also increasingly made out of something minor. The continual stream of news that is attached to each person through personal computers and smartphones maybe gives us more of a physical sense of being somewhere when we are in fact completely absent.

An absence of physical presence is what defines North America’s 9/11 as equally as an inability to articulate the true terror of those who did witness the events unfold in real time, without constant replay. On Gerhard Richter’s painting September, the art historian Robert Storr remarked that he himself finds it difficult to separate his personal account of the day and the images he saw on the television. In fact, a continual question that arises is how to begin the task of staging the representational on something already so represented? On something so concrete yet buried in the effervescent nature of the photograph? The occurrences in the aftermath of the event in particular, the whole of Lower Manhattan buried in a Pompeii-esque ash of office papers, seemed in themselves a poetic legacy that no artist could ever create. The political fall out has agitated some artistic response but, the decade of the War on Terror seems eerily quiet in contrast to, for comparisons sake, the Vietnam War. It is curious that an event that was so staged and so visual has barely any visual response to it.

This sense of the intangible is what the brief for the Terror issue was based upon. In the years leading up to the Iraq War, the apocalyptic visions of September 11th were pulsing through the veins of the world media when the Invasion of Afghanistan was announced. These representations were continually recycled to justify the War on Terror. The world had become a place saturated with hyperactive illustrations, replayed over and over, filling the citizens of predominately western nations with a fear of this unknown, slippery, indefinable enemy known as Terror. The Invasion of Afghanistan was only the beginning of this stretching decade of conflict. The War on Terror left in its wake a trail of imagery, of spectacle, of war and of the sublime that is so dense in it’s recording (coinciding with the new digital era) that grasping the concept of the conflict: Terror, is still difficult a decade later.

Contextualising these events within the realm of art has not been forthcoming –Richter began working on September in 2004 and even he struggled to grasp how to proceed with his initial drawings. In order to allow a basis for response to the Terror brief, 12-Pages directed the respondents to consider wide resources from the imagery of war to the poetic mechanisms of the sublime, to begin to render a dialogue that describes the preceding decade.

Posted by TBC Artists' Collective at 10:33